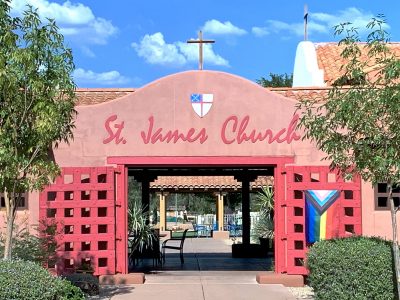 As Episcopalians, we believe in a loving, liberating, and life-giving God: Father, Son, and Holy Spirit. A God that cares about diversity in its revelation. We have a legacy of inclusion, aspiring to tell and exemplify God’s love for every human being; women and men serve as bishops, priests, and deacons in our church. Laypeople and clergy cooperate as leaders at all levels of our church. We believe that God loves all – no exceptions.

In these past years, Episcopal churches have been voicing this belief through more active participation in LGBTQ+ events. We are marching, singing, and proclaiming with pride that we are all equal in the image of God. Too often humanity forces division and exclusion between the children of God. The church is called to be a prophetic voice to remind people that nobody is excluded in God’s heart. Episcopal churches are placing rainbow flags in the churches to reaffirm that we are a safe house for all, including LGBTQ+ folks.

The rainbow flag was initially created in 1978 by San Francisco artist Gilbert Baker. Since then, it has spread around the world to be a reminder that nobody should experience discrimination for their gender or sexual orientation. Currently, there are a dozen variations of the original flag, in the attempt to include groups and movements. The one we have placed in our parish is known as the Progress Flag. This variation adds a chevron along the hoist that features black, brown, light blue, pink, and white stripes to bring those communities (marginalized people of color, trans individuals, those living with HIV/AIDS and those who have been lost) to the forefront; “the arrow points to the right to show forward movement, while being on the left edge shows that progress still needs to be made”.

Before the rainbow-striped Pride flag was created, the LGBTQ+ community tended to use the pink triangle as a symbol, adapted from the badge that gay prisoners were forced to wear in Nazi concentration camps. During World War II, Nazis forced gay men in camps to wear a downward-pointing triangle, with around 100,000 estimated to have been held prisoner and 65,000 thought to have been killed. Currently, the gay community has adopted the pink triangle to remember and honor those killed during the holocaust.

There is still a long journey in front of us to understand the diversity of the children of God. Seeing God’s face in the face of our brothers and sisters is key to begin living heaven on earth.